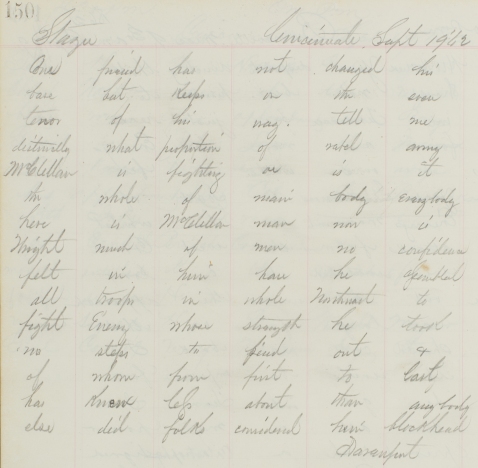 Stager  Cincinnati Sept 19 ’62
Our friend has not changed his
base but Keeps on the even
tenor of his way. tell me
distinctly what proportion of rebel army
McClellan is fighting or is it
the whole of main body everybody
here is McClellan man nor is
Wright much of man no confidence
felt in him how he assembled
all troops in whole Northwest to
fight Enemy whose strength he took
no steps to find out &
of whom from first to last
has Knew less about than anybody
else did folks considered him blockhead
Davenport

The accumulative nature of this collection allows us to see some events from various points of view. Most of the telegrams from Cincinnati around this date are sent by General Wright himself (like yesterday’s), but this message comes from a far more obscure individual. Thanks to the memo book of operators and their locations (which is available in the Huntington Digital Library), we are able to identify “Davenport” as Charles Davenport, a superintendent for Western Union, and know that he was in possession of codebook 9. It’s messages like this one, which does not seem to be in the The War of the Rebellion (previously the primary source of Union Civil War telegrams), that offer us insight into the lives and opinions of everyday people.