On 1:05 a.m. of October 4, the USMT operator in Washington received this message from Major General William S. Rosecrans, the commander of the Army of the Cumberland. Unbeknownst to Rosecrans, this telegram would play a fateful role in his career.

Rosecrans, a rising star in the United States military, was possessed of a brusque and outspoken manner which did little to endear him to his fellow officers and his superiors — his enemies included Ulysses S. Grant and pretty much the entire War Department.  Just three months earlier, the Secretary of War chose to mark the end of Rosecrans’s superbly executed campaign in Middle Tennessee by crowing over Grant’s victory at Vicksburg, finishing his telegram with a parting shot: “You and your noble army now have a chance to give the finishing blow to the rebellion. Will you neglect the chance?”

The events of September 1863 must have filled Stanton with a sense of grim satisfaction as Rosecrans failed to deliver the “finishing blow.” His loss at Chickamauga on September 20 was the worst defeat for the Union forces in the West. Rosecrans who, as Lincoln put it, acted “stunned like a duck hit on the head,” retreated to Chattanooga.

Two weeks later he sent the above telegram. The President replied ten hours later, noting that he was planning on “doing something like what you suggest,” but added that an amnesty would make sense only if it did not follow a major defeat. Lincoln was worried that such an amnesty would be perceived as “a confession of weakness and fear.” In contrast to Lincoln, Stanton was furious. Not only did Rosecrans take it upon himself to advise the President on matters of policy, but he did so over the Secretary’s head.  Stanton seized on the “amnesty telegram,” which he painted as defeatist, as a pretext to dismiss the general.

On October 16, Lincoln’s cabinet voted to relieve Rosecrans from command.  He would wait months for another command. Appointed to head the Department of Missouri, he would finish the war riding a desk in St. Louis. 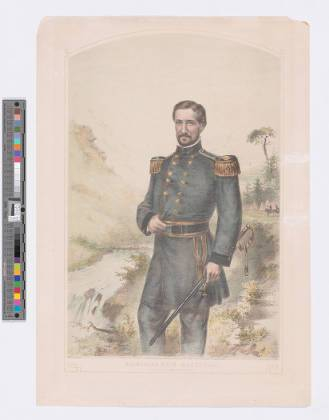 Big thanks to our volunteer Stork for this find!