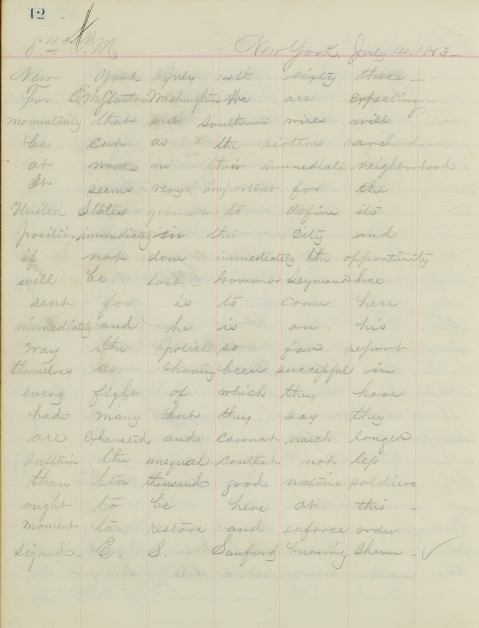 8.40 P.M. New York. July 14, 1863
New York July 14th sixty three
For E. M. Stanton Washington We are expecting
momentarily that our Southern wires will
be cut as the rioters are
at work in their immediate neighborhood
It seems very important for the
United States government to define its
position immediately in this city and
if not done immediately the opportunity
will be lost. Governor Seymour has
sent for is to come here
immediately and he is on his
way the police so far report
themselves as having been successful in
every fight of which they have
had many but they say they
are exhausted and cannot much longer
sustain the unequal contest not less
than ten thousand good native soldiers
ought to be here at this
moment to restore and enforce order
signed E. S. Sanford burning shame

On the day when Edward Sewall Sanford (1817-1882), the president of the American Telegraph Company and the supervisor of the telegraphic messages in the United States, sent this telegram, July 14th, 1863, the New York Times came out with the headline: “A DAY OF INFAMY AND DISGRACE.”

What had begun a day early, on Monday, the 13th as a rowdy protest against the draft, had turned into a riot of mass pillaging, marauding, murder, and pogroms. The rioters, dominated by Irish Catholic industrial laborers, targeted police officers, government officials, prominent Republicans, journalists of Republican newspapers, as well as African-American, German and Chinese residents.

By noon of the 14th, the city was plunged into a full-blown race riot.  One eyewitness, school teacher Samuel Morehouse, heard the rioters shouting that “this land is for white men only.” The horrified New York Times reporter described the scenes that “were painful in the extreme, and humiliating to human nature,” as mobs of “foul-looking boys and men” went door to “in pursuit of negroes, who were assailed wherever found.”  At 4 p.m. a mob set fire to the Colored Orphan Asylum of Forty-Third Street and Fifth Avenue and blocked the firemen from saving the building or its occupants. At 8 p.m., a crowd of about 400 white men attacked a black coachman with clubs and paving stones, hung him, and set his body on fire.

The Riot in New York. The Mob Lynching a Negro in Clarkson Street. Harper’s Weekly. 1863, Aug. 1.

The Times reporter singled out the “inhuman treatment of the negroes of the City” as “the cunningly-devised cue that had been given to the rioters by the instigators of the outbreak.” This not too subtle hint endorsed a popular suspicion that the riots had been orchestrated by a network of Confederate sympathizers.

Another cue was the fact that the rioters set out to tear up railroad tracks, ferry slips, gas factories, and telegraph lines. Historian Iver Berstein noted that it was this assault on the city infrastructure, rather than the common attacks on draft offices or racial violence, that set the New York Draft Riots apart from other instance of mob violence of the Civil War era (The New York City Draft Riots, Oxford University Press, 1990, p. 34).

To many commentators this certainly looked like sabotage designed to plunge the city into darkness and chaos and thus help the “Southern rebels,” perhaps even enable a Confederate invasion. This was how it appeared to Sanford. Reporting to the Secretary of War, he described the riots as “an organized attempt to take advantage of the absence of military force.”  With the state militia fighting in Pennsylvania, the city could count only on a few troops protecting the Navy Yard and harbor forts, the untested Invalid Corps and Provost Guard and the Metropolitan Police.

What worried Sanford most was the fact that, as he informed Stanton on the evening of July 13, “the telegraph is especially sought for destruction.” Several hours later, he reported that rioters had torn down the wires around the Third Street. By Tuesday evening, as seen from the above telegram, the communication with Washington, D.C. was under threat. The lines were still operating, though, for he used them on evening of July 15 to report that he had to receive a telegram from Boston “from New Rochelle by horse-power, our lines up to that point being destroyed.”

Bernstein suggested that by tearing down telegraph lines, the rioters sought to prevent the city authorities to request troops from Albany or Washington.  For New York City, the resort to federal troops was unprecedented; neither the Republican mayor, nor the Democratic governor were willing to go that route. Governor Horatio Seymour, summoned from this summer home at Long Branch, announced that the city was “in the state of insurrection” and declared a state of emergency, in part to forestall federal interference.

By the early afternoon of July 14, there was no choice. In a city plunged into chaos, the calls for “an immediate and terrible” display of federal power spread from Republican politicians to merchants and financiers.  New York mayor George Opdyke formally asked Secretary of War to send what military force he could spare. Several hundred troops were diverted from the Gettysburg battlefield.

The theory of a Confederate conspiracy, never substantiated, soon dissipated, but the press and the public opinion seized upon the all too familiar image of the Irish Catholic immigrant as the sole culprit of the outrage. Even some Union regiments were suspect.  General Henry W. Halleck was told that the only New York regiment that could be trusted with the riot duty was the native-born and Protestant Seventh Regiment of New York infantry. In this Sanford concurred, as seen the telegram, in his calling for “native-born,” i.e. non-immigrant, soldiers.

The New York Draft Riots that came only ten days after the double victory at Gettysburg and Vicksburg shocked the nation. It was, as Sanford’s telegraph operator, bitterly remarked, “a burning shame.”