4 PM. Butterfield About what

distance is it from

from the Observatory, we stopped

at last Thursday to

to the line of Enemys

you ranged the glass upon for me

Quite a few telegrams in the Eckert ledgers have little messages from operators that filled up empty spaces at the end of the last line. Most of these notes are greetings of various degrees of jocularity (“wake up Charles!”), brief remarks about the ever so popular subject of the weather (“hot here” in the telegram on this page), reports of incidents (“Lawrence lost his cap”), observations the fighting, which often read like weather reports, or market tips. This telegram ends with a breathless tribute to Lincoln.

The telegram is part of the ledger EC 23 which comprises messages, mostly in cipher, sent from the War Department to the Headquarters of the Army of the Potomac and Fortress Monroe during the disastrous battle of Chancellorsville (1863, Apr. 30 – May 6), and its immediate aftermath.

The disaster was in large part caused by a breakdown in communications. Hooker’s battle plan hinged on complex system on the telegraph and flag signaling, which, ideally, would provide him with an unprecedented mode of instant communication. The USMT operators were to handle strategic communications between the army and Washington. The Signal Corps was charged with tactical communications between the army’s wings and units provided by the traditional flag signaling system and new Beardslee Patent Magneto-Electric Field Telegraph machines. Hooker’s chief of staff, Daniel Butterfield, was charged with overseeing all the communications.

For some eighteen hours, the right wing of Hooker’s army was plunged into a communications blackout.  On May 1, Butterfield dispatched USMT operators to take over.  By then it was too late.

All the while the president and the War Department were kept in the dark. Hooker had instructed Butterfield not to wire anything to Washington. It was only at 8:50 a.m. on May 3 when Butterfield informed Lincoln that “a battle is in progress.” By then Washington was already awash in increasingly panicky rumors. At 1 p.m. on May 4, Butterfield wired that the army re-crossed the Rappahanock. Two hours later, Lincoln telegraphed “We have news that that the enemy has reoccupied heights above Fredericksburg is that so?” Hooker conceded: “I am informed that is so, but attach no importance to it.” On May 6, 1863, Hooker ordered the remaining troops to re-cross the north side of the Rappahanock. It was over.  Lincoln received the word at 3 p.m. An hour later, Lincoln and Halleck boarded a steamer for the Army of the Potomac.

The president spent Thursday, May 7, at Hooker’s headquarters. At the end of the day, Lincoln refused to blame anyone and expressed his full confidence in the general. The War Department decided to put a positive spin on the defeat: not only “there “has been no serious disaster to the organization or the efficiency of the army,” but thanks to the “brilliant success” of Stoneman’s raid on Richmond, the enemy’s communications “have been cut in all directions.” This was an exaggeration, to say the least. The railroads that Stoneman claimed to have destroyed were fully operational by May 8. Hooker later grumbled: “I might as well have had a wet shirt command my cavalry,” adding: “ Had Gen. Lee’s communications with Richmond been severed, not many of his Army would ever have returned to that city.”

A disruption in the enemy of communications did occur, however. During the battle, the wig-wag signaling played an important role, although not the one intended. When it became apparent that the Confederate signal officers could easily read the Union signals, Butterfield ordered not to use them only to transmit false information.

As seen from this telegram, Butterfield took Lincoln on a tour of the lines of signal-flag stations. The” Observatory” is most likely the central station, known as Station F., located halfway between Falmouth and the Army of the Potomac headquarters. A notorious self-promoter and a loyal ally of Hooker’s, Butterfield, no doubt, worked hard to impress the president with the importance of flag-signals. Four days later, Lincoln was still thinking about how close the enemy lines were. Butterfield helpfully supplied that the distance between the lines was just “about two miles in a direct line.”  As we have already seen, in the coming months, Butterfield regularly forwarded intercepted signals to the president. (See The Dust of War https://blog.decodingthecivilwar.org/2017/06/19/the-dust-of-war/)

But why would an USMT operator feel so overwhelmed by this seemingly routine message? Lincoln certainly was no stranger to the USMT office. The president spent hours at the cipher room, (he usually commandeered Eckert’s desk), drafting numerous telegrams and handing them over to the operators.

Curiously, there is no handwritten draft of this message. The draft of the telegram to John A. Dix, sent just before the message to Butterfield, has been preserved and now forms part of the Charles W. McClellan Lincolniana collection at the Brown University. Neither does it appear in the Official Records of the Rebellion, unlike the telegram to Hooker on the bottom of this page.

The editors of the Collected Works of Abraham Lincoln published it after the text in the 1865 Report of the Joint Committee on the Conduct of the War. The Committee was then investigating the Army of the Potomac; the heavily politicized inquiry aimed at replacing George G. Meade with Joseph Hooker and necessarily sought to rewrite the history of the battle of Chancellorsville. The telegram was among a batch of records covering Hooker’s command of the Army of the Potomac assembled by Edwin M. Stanton.

It is possible that Lincoln’s draft was lost, misplaced, misfiled or even destroyed by the clerks who prepared the Joint Committee’s final report. It is also, however, possible, that no draft ever existed and that the telegram was dictated rather than written. This would explain the operators’ gushing note: he was obviously thrilled to transmit “Honest Old Abraham’s” own words as the great man loomed over his desk. 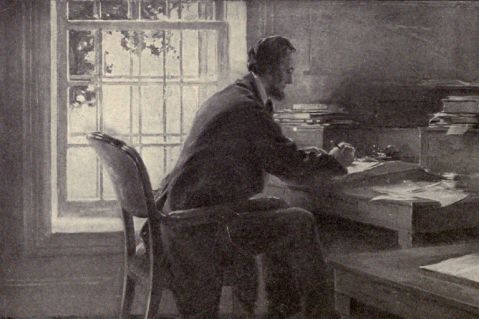