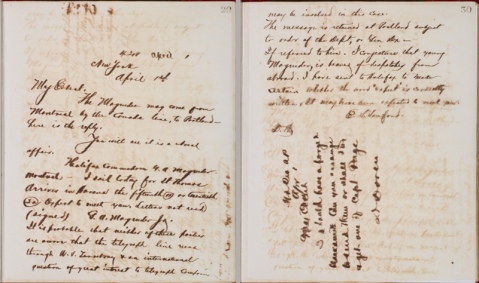 4:20 P April 1
New York
April 1st
Maj. Eckert.
The Magruder msg come from
Montreal by the Canada line, to Portland –
here is the reply.
You will see it is a Naval
affair.
Halifax Commodore G.A. Magruder
Montreal – I sail today for St. Thomas
arrives in Havana the fifteenth (15) or twentieth
(20) Expect to meet you. Letters not recd
(signed) G.A. Magruder Jr.
It is probable that neither of these parties
are aware that the telegraph line runs
through W.U. Territory & an international
question of great interest to telegraph companies
may be involved in this case.
The message is retained at Portland subject
to order of the Dept, or Gen Dix.
If referred to him. I Conjecture that young
Magruder is bearer of dispatches from
abroad. I have sent to Halifax to make
certain whether the word “expect” is correctly
written, It may have been expected to meet you.
E.S. Sanford
D.H.

What do you do when an enemy communication just falls into your lap?

On March 31, 1864, a puzzled Edward S. Sanford sent a message from the New York office of the American Telegraph Company. The Company’s office in Portland, Maine had received a telegram addressed to “Maj. G.A. Magruder at Halifax.” The sender was Commodore George Allan Magruder (1800-1871), the former chief of the U.S. Bureau of Ordnance and Hydrography of the Navy Department who lived in Montreal ever since he resigned from the service in April 1861. The recipient was his son and namesake, Major George Allan Magruder, Jr., (b. 1842), a Confederate officer on the staff of his uncle, John Bankhead Magruder. Since October 1863, the younger Magruder acted as a special envoy of the Confederate State Department and carried diplomatic dispatches to Europe and Cuba.

How did a message sent from Montreal to Halifax end up in Portland? Sanford thought “it was not sent by Magruder in person but brought to Portland by some one [who] had orders to forward from first telegraph station.” This theory fell through the next day, when the Maine operator received the response. Magruder informed his father that he was about to sail for St. Thomas, to arrive in Havana in two to three weeks, adding that he had received no letters.

Sanford shouldn’t have been so puzzled. Right before the war, his own company, the American Telegraph Company had engineered a long-term lease of two major Canadian companies, the New Brunswick and Nova Scotia Electric Telegraph lines, thus linking Nova Scotia and Maine. Apparently, the Magruders used the Nova Scotia company unaware that it was operated by Sanford’s outfit.

The messages were not intercepted. Neither the USMT nor Sanford, who was serving as “military supervisor of telegraphic messages,” had anything to do with obtaining this piece of intelligence. It’s just sort of wandered into an office of a private commercial telegraph line.

The realities of the Civil War often run contrary to our ideas of what war-time communication lines are supposed to be. There was, of course, no unified system of military telegraph. In February 1862, Congress had authorized President Lincoln to “take possession of any or all the telegraph lines in the United States, their offices and appurtenances.” The Lincoln administration did no such thing. Instead, the War Department created what historian Joshua D. Wolff called “a mixed military economy” which relied on private contractors and “public enterprises.” (Western Union and the Creation of the American Corporate Order, 1845-1893 (Cambridge University Press, 2013).

The system created numerous problems. The USMT leadership retained their positions of executives of communications companies, raising suspicions about a conflict of interest. The leadership of Western Union and the American Telegraph Company painted themselves as selfless patriots. The reality was more complicated: serving as government officials while overseeing their own businesses, the companies’ managers not only turned the United States government into their customer, but also harnessed the military necessity to extract the unprecedented level of protection, public funding, and material support.

The overlapping commitments more or less erased the boundaries between public service and private interest. For example, Stanton’s directives that military supervisors did not interfere with “private business” could jeopardize military secrecy, as with no provisions for an eventuality of said business located in a border or even a Confederate state.

As it turned out, it was also possible that an American commercial company could transmit messages sent and received abroad.  No wonder Sanford was stumped. There was neither precedent nor proper chain of command. Eckert was to contact Charles A. Dana, newly appointed Assistant Secretary of War, to find out “to whom we can refer similar cases when they require alert action.”

There were also international implications to think about. Was it legal for a party in a civil war to intercept messages originating in another sovereign nation, especially if such intercept was done by a private company? With some relief, Sanford remarked that because it was “probable that neither of these parties are aware that the telegraph line runs through W.U. [Western Union] Territory,” an “international question of great interest to telegraph companies may be invalid in this case.” (Western Union did not have any holdings in Canada). In other words, finders keepers.

Hurrah for our volunteer JustStardust for spotting this!